"Don't pee on my leg and tell me it's raining!"

That's what the LDS "Mormon" church does to keep its members compliant and in the dark. Examples: The Book of Abraham, the Salamander Letters, Joseph Smith's marriages to already-married women...the list goes on.

Umm, So I Got Ordained

But in all seriousness, i'm sorta feeling a desire to put myself into some sort of box since getting ordained.  I feel as if i need some sort of religious definition, which is what i've wanted to avoid since leaving Motown.

So, i'm not gonna do it.  No defining.  I'm pro-human.  That's it.  And i got ordained so that when Arizona legalizes gay marriage, i will be able to perform ceremonies.  This will make me very happy.
Spewed forth by goodbye kitty at 13:20 10 comments:

Watch Out For Atheists!

Apparently atheists are crotchety old goats in bathrobes, holding cups of (oh no!) coffee. As the (please say you're fucking kidding me) Spiritual Safety Tip poster says, you should avoid talking to these "poor lost souls." Hey, i have a better idea! LET'S BURN THEM AT THE STAKE!

Nah, religion's not dangerous. It doesn't promote hatred or fear. There are no hypocrisies involved in practicing religion. Religious folk are tolerant of both other religions AND those who choose NOT to subscribe, right? All the time and money spent on making stupid shit like the poster below is perfectly justified, right? It's for the protection of our children, should those goat-like old atheists lash out at them!

Last time i checked, "freedom of religion" also meant freedom FROM religion if one so chooses. Freedom from a god of any sort, as a matter of fact. But fear is a powerful weapon and as long as religious leaders are serving up heaps of it to the masses, we will continue to see idiocies like this poster and millions of dollars will be spent by various religious organizations to ensure people remain fearful of those who are "different."

Sounds very loving and kind, doesn't it? (Yes, i'm dripping with sarcasm; it's part of the healing process. Someday i may repost this, but say it nicely and more straight-forward. Until then, sarcasm is what's for dinner!) 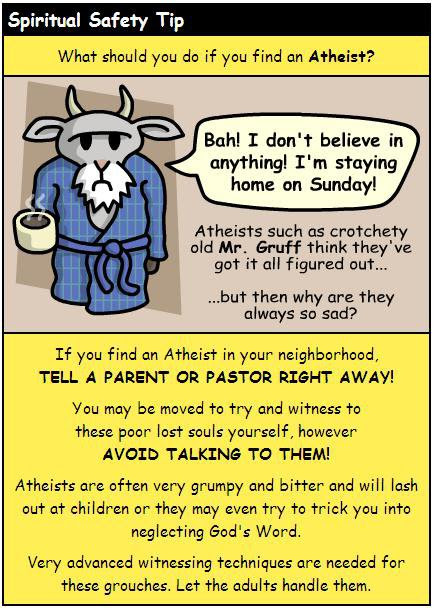 Spewed forth by goodbye kitty at 07:12 4 comments:

‎"If there ever comes a day when the Saints interfere with the rights of others to live as they see fit, you can know with assurance that the Church is no longer led by a Prophet, but a mere man." - Brigham Young
Spewed forth by goodbye kitty at 09:10 4 comments:

I said it on my not-anonymous blog, which is here:

http://crapstain.blogspot.com/2010/10/driving-in-second-gear.html
Spewed forth by goodbye kitty at 19:01 No comments:

The Polygamous Wonders of the World

So, i hear there are people petitioning for the legalization of polygamy in these our grand United States.  I've generally always been of the "to each his or her own" mindset (except for certain embarrassing moments as a hive member), and i think i'm on board with polygamy being practiced by consenting, sane adults who, for whatever reason, want to have multiple spouses (spice?  like mouses and mice?).  I mean, really, i wouldn't mind having another husband or two.  Not that my Hubster leaves me wanting more; he's a wonderful partner/friend/lover/co-conspirator but maybe it could be fun and advantageous to have another husband.  Oh wait, what the hell am i thinking?  One's enough!  All i could really want is the occasional fling, and honestly, i'm getting too old to really give a shit about that anymore, anyway.  For me, it's more about freedom.  Freedom to be who i am and be loved for it is important to me.  But i digress....
What i'm really interested in seeing is how the LDS church responds if polygamy is legalized.  Will they begin practicing it again, since it was ONLY stopped because it was outlawed in the U.S.?  Will it be a commandment to the members of the faith?
Whoo hoo!  I can't wait to see how this all unfolds!
Spewed forth by goodbye kitty at 08:00 6 comments:

Email ThisBlogThis!Share to TwitterShare to FacebookShare to Pinterest
Labels: polygamy

http://www.postmormon.org/exp_e/index.php/discussions/viewthread/23960/
Spewed forth by goodbye kitty at 09:41 8 comments:

Email ThisBlogThis!Share to TwitterShare to FacebookShare to Pinterest
Labels: resignation

I think gay people are nature's answer to the over-population our planet is facing because Mormons believe there are kolobillions of spirits waiting to be born into human bodies on Earth.  Nature, through homosexuals, is trying to cut down on births and thus save our planet.

But wait, wait, the irony continues.  Kind and loving gay couples who want to adopt a baby unwanted by its bio parents often can't.  Back in the late 1990's, my boss was a smart and artsy lesbian who had been in a monogamous relationship for 20 years.  She and her partner wanted to adopt a baby who had been born with AIDS.  They were denied because they were lesbians.  They were denied because religious homophobes would rather a baby with AIDS be alone, possibly die alone, rather than live in a loving family just because that family happened to have two mothers instead of a mother and a father.  But it's okay to put that baby into a household of people who will raise him or her to judge, to condemn, to believe all sorts of wackaloonery (thank you, Amy, for that word).

What a crazy, crazy world in which we live!

Spewed forth by goodbye kitty at 07:44 4 comments: